Lessons from a teacher on raising 1.4 billion dollars for underfunded classrooms over 22 years

Teachers in state schools in the United States spend almost two billion dollars of their own money each year on classroom supplies due to underfunding in the education system. As this situation affects 90% of educators in the public sector, according to several studies, many teachers look for alternative ways to get funding – and one of them has taken the lead by raising 1.4 billion dollars for almost 800,000 teachers over the last two decades. 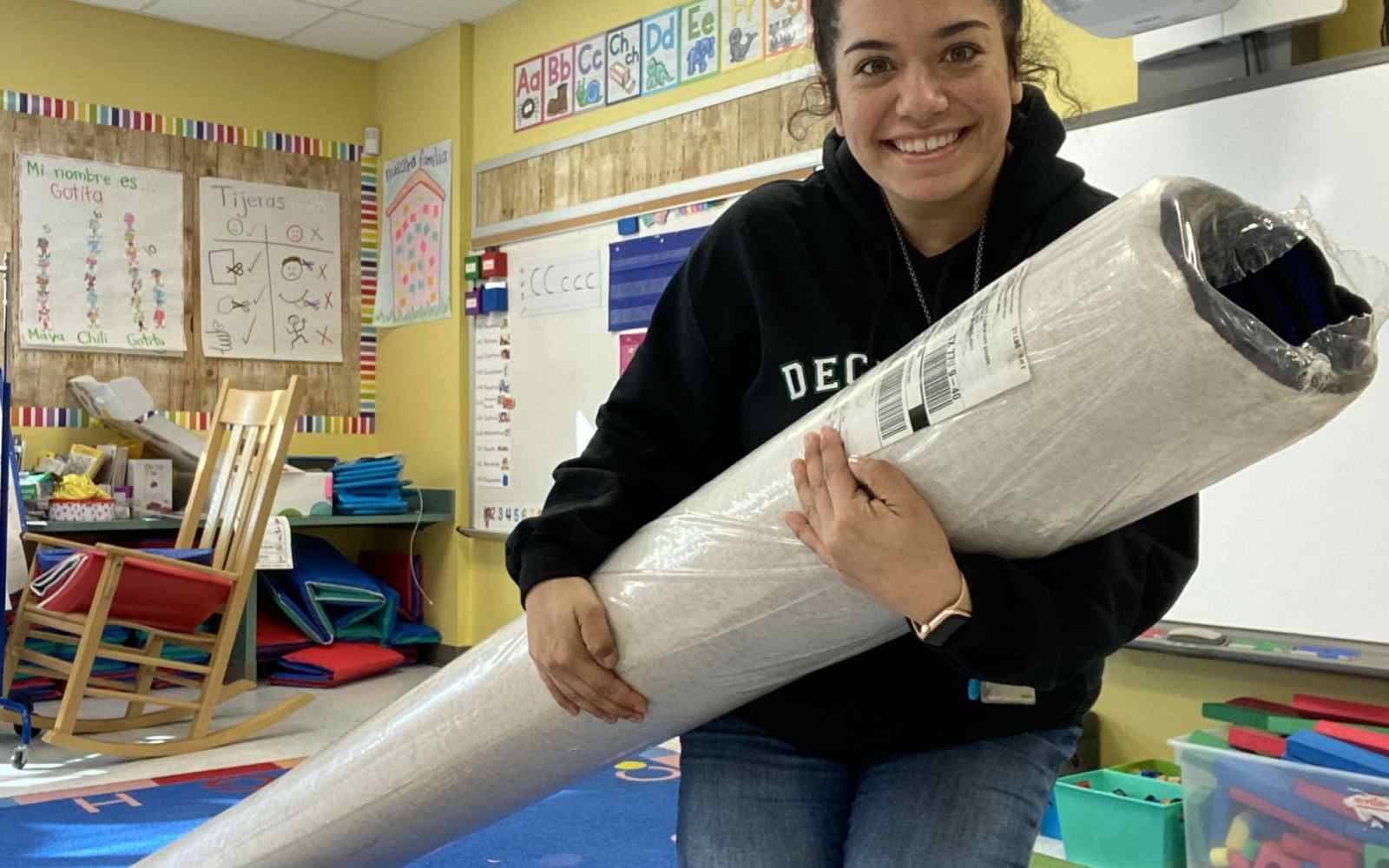 Teachers in state schools in the United States spend almost two billion dollars of their own money each year on classroom supplies due to underfunding in the education system. As this situation affects 90% of educators in the public sector, according to several studies, many teachers look for alternative ways to get funding – and one of them has taken the lead by raising 1.4 billion dollars for almost 800,000 teachers over the last two decades.

Charles Best experienced for himself what it was like to work without all the key resources during his time teaching history and English at a public high school in the Bronx, in New York. In response, he founded DonorsChoose, a crowdfunding platform where teachers request resources for their classrooms and funders choose how much to donate and where it should be used. From its origins in 2000, Best gradually built up the nonprofit project, scaling up its impact to the point where it has now supported 2.5 million projects in 88,259 schools in the country, thanks to 5.6 million donors.

Despite these impressive figures, the goal of DonorsChoose in fact goes beyond providing materials and experiences, as it aims to impact educational equity by not only supporting teachers and making learning more engaging, but also by providing authorities with data and knowledge to help them allocate funding in a fairer and more effective way. At the same time, it empowers teachers, who are being listened to, as they step up to play a decisive role in the system change process.

“But many of the projects go beyond what you would expect the school system to provide and represent really interesting, innovative new ways of teaching that simply require a trip to Washington DC, butterfly cocoons, a rope or an underwater robotics kit. And I think some of those projects are at least baby steps toward a teacher being a changemaker or a social entrepreneur.”

But there is still a long way to go, according to Best.

“Public school teachers in the United States spend almost $2 billion out of their own pockets every year, and we're now at about $150 million in annual giving with the project so we are still just scratching at the surface of one of the problems that we tackle,” he explains.

The systemic change triggered by DonorsChoose is reflected on different levels. A study of the platform published in 2020 by the University of Michigan demonstrated that even just one funded project at a school, even if it has a low cost, leads to improved academic outcomes for students.

“Supporting teachers with a few hundred dollars so they can implement their ideas leads to measurable improvement and reduced inequality in outcomes,” the research concludes. “Our results so far indicate projects funded through DonorsChoose have an overall positive impact on school performance and predominantly impact students performing at the bottom.”

With 80% of their funded projects coming in low-income schools, DonorsChoose is effectively acting as a force of equity in the public education system in the US.

“We think that the feeling students and teachers experience when they receive a donation is powerful as well as the physical materials. When they know that there are people scattered across all across America who are rooting for them, and who are invested in their needs and their ideas, and who want to see them succeed and that sense of connectedness and of people out there, rooting for you, that feeling is powerful.

“I think for a platform to be a force for equity it is incumbent that they develop a network of donors. So that, in our case, that is why we've become the magnet for teachers and low-income communities because our platform is the one place where a teacher who does not have friends with money, a teacher who does not have students’ parents with money can still get a classroom dream funded because they can be discovered by donors they've never met,” Best concludes.

It is that opportunity for any teacher to reach out and access donors outside their own circle of contacts that has made the DonorsChoose model so successful, after connecting 5.6 million donors with 800,000 teachers over the last 22 years.

“We assumed that it was DonorsChoose’s responsibility to bring donors to the table, not the responsibility of the teachers. And that was because when DonorsChoose grew out of the high school in the Bronx where I was a history teacher. That was before Facebook, so I didn’t have Facebook friends to turn to, and I was teaching in a low-income community where it wouldn't feel right to ask for a teacher to ask their students’ parents, for the money for their request,” recalls Best.

“So from day one we considered it our duty to go out there and find donors through DonorsChoose marketing efforts, not through putting the burden on teachers to fundraise. The result today is that only 25% of the dollars given to teachers’ project requests on our platform come from teachers sharing their projects on social media, and 75% come from donors who have never met the teacher, or students, whom they are supporting. Donors are part of the network that we've built up over the years of folks who want to support projects where the need is greatest based on finding a shared affiliation, like, ‘Oh, that’s the city where I grew up or I love Shakespeare, so I’m going to fund that teacher.’It is also remarkable that most of DonorsChoose donors are first time givers to the public education system.

Unlocking the potential of those changemaking teachers who want to go that extra mile for their students, is the driving force of DonorsChoose growth, along with the teachers’ network that encourages further engagement and participation on the platform.

“We do have a next stage of engagement for the hundreds of teachers who effectively volunteer their time to do the vetting and authentication of other teachers projects,” Best says. “And that is serving as a teacher ambassador for DonorsChoose to their school district and to give presentations about how teachers can use DonorsChoose and to generally be a spokesperson for our organisation.”

A robust network of donors attracts teachers to participate on the platform as they have the confidence that their dreams will get funded. The transparency of the process in turn assures donors that their money is spent well and drives their participation further. That constant cycle of interactions between teachers and donors creates a huge amount of valuable data from the ground about the realities in the public classrooms that DonorsChoose makes strategically available to the authorities.

By sharing valuable data and knowledge collected first-hand from teachers with key players making decisions on budgets and allocation, the organisation aims to improve the way the government funds schools and effectively, the way the whole education system works.

“We’ve opened up our data and created reporting tools so that school district officials, policymakers, budget leaders can see and hear what classroom teachers are trying to tell them about the resources most needed in particular grades, neighbourhoods, and schools,” says Best.

“The big dream is for DonorsChoose to influence billions of dollars of government education spending and to make it, smarter, more responsive, more effective. Now policymakers and concerned citizens can hear what teachers are saying, what the most effective books are or the most needed technology is, as expressed by the projects they're creating on our site. We’ve opened up that data. There are now more than 100 school districts who are subscribed to our reporting. In part, it’s because they want to just know and see that their teachers are getting funded, but our hope is that that will soon become a means of listening to teachers, and potentially reflecting that in school system spending.”

The way DonorsChoose scaled up its impact, from being a self-made website of a teacher raising funds for his school to becoming a funding tool that has been used by 80% of state schools in the U.S., is partly down to some key principles at the core of their work, such as activating agency of teachers and donors and distributing the ability to solve among them, as well as empowering the education system with insights from the interactions from these two networks. Such design principles at the core of interventions succesfuly leveraging technology for impact have been studied in a recent research published by ASPIRe.

Leveraging Platforms for the Good of All is a research paper that analyses DonorsChoose along with 13 cutting edge platforms led by Ashoka Fellows and distills design principles of platforms for good.